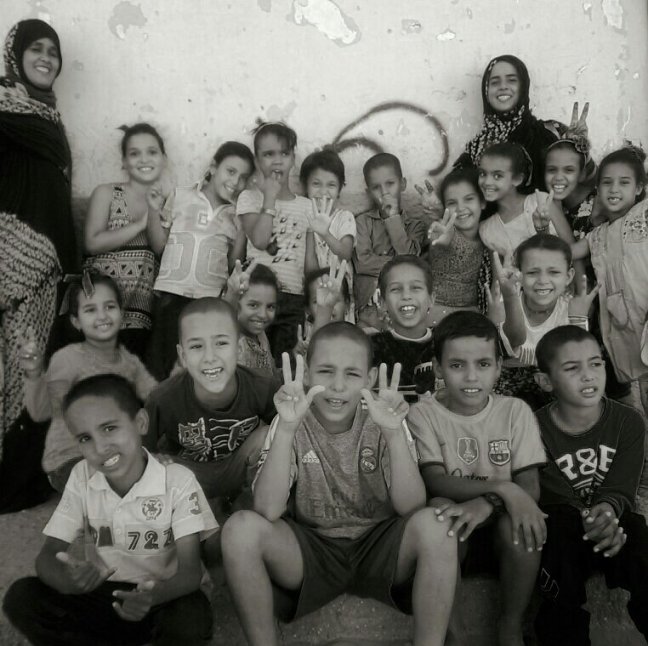 I threw out my DBS guidelines the moment I got here: the children I teach all hug me goodbye and plant forceful kisses on my cheeks as they go. So I knew I would have to think differently about the relationship between children and teachers. And I’m starting to realise other things about this refugee childhood at the same time.

Picture the scene. There I am waiting for the school gates to be unlocked so my lovely students can bound up across the sandy courtyard to our classroom and we can begin our English classes. As with most days, the 3.30pm start time of our class is casual to say the least and though I’ve been there since 3.15pm in the vain hope that I can get in early to set up and make sure things are ready (I do this every day because there has been a total of three times in ten weeks when I have been able to get in there early, so it’s worth the continued hope), it’s already approaching 3.45pm and no sign of anyone coming with the key for the padlock. ‘On time’ here just doesn’t have the same significance.

The children have been gathering since about 3.20pm. Some of my girls (those I teach and a few I just know from this hanging out time) have resorted to their usual hairdressing antics and are stroking and plaiting my hair (they don’t get to see women’s long hair very often as it is always neatly tucked away behind a melfha. Plus mine has the added bonus of being blonde – quite the rarity). If I was anywhere else, I’d probably not think this very professional of a teacher. But I love it and I love how comfortable they are being affectionate with me, so I just go with it.

More and more groups of children are gathering and things are starting to get a little fraught between some of the friendship groups. There are several boys engaged in frantic wrestling competitions which are getting a little out of hand. One child has found a bit of broken piping and seems to be threatening others with it like they see some teachers do to them. One child has found a stray piece of cable (electricity cables are all over the sand here both a trip and electrocution hazard I shouldn’t wonder, but I now barely even notice that I’m walking over them every day) and seems to have created a sort of Gladiatorial scenario where she is swinging it around her and others have to get out of her way. Some of the arguing boys with their pushing and shoving are far too close to the road for my liking, and cars often drive stupidly fast here and appear out of nowhere in a cloud of dust. Three boys are on the road trying to simultaneously get on one bike, which is without pedals and fully functioning brakes.

As you can imagine, I’m having a small heart attack whilst surveying the scene and trying to weigh up which is the most important situation in which to intervene first. None of this is new to me. I see most on a daily basis and break up fights as best I can (“stop it” goes down really well with the slightly older boys who have no idea of any English and think I am totally irrelevant) and I often try and get one girl to apologise to the other girl for making her cry even though the crying girl then often gets up off the sand and slaps the other girl as soon as she has composed herself.

But on this particular day, I realise that there are five other teachers sitting around waiting for the gates to open and not one of them seems the least bit concerned about what is going on in our surroundings. Maybe they think that until we get inside the school gates, these children aren’t their problem? But then finally the penny drops for me as I think back to a conversation with a Saharawi colleague a few weeks back about the difference between childhood here and childhood where I’m from.

This colleague had focused mainly on the rules and regulations we have in the UK, the fears we seem to have about what might happen to our children. And although she understood why that was important in a country with huge cities with lots of cars and other dangers for children, she was proud of the communal and independent way in which children grow up in the camps and didn’t hide her slight criticism of our over-regulated childhood.

I have indeed noticed that children are much more independent and self-sufficient here. It would be impossible to ignore. I have seen children under two dexterously feed themselves a yoghurt with their hands without dropping a single bit on their clothes or the floor. I have seen children of the same age expertly get all the meat off a bone with their fingers and their teeth. Children are free to be in and out of each other’s houses and rule the streets throughout the day when not at school. They are fearless and bold. They are all completely confident to talk to strangers and many of the four, five and six year-olds I encounter in the street will bound up to me and chat in the little bits of Spanish they know, hold my hand and walk a little way with me before returning to the route they were taking. Having said that, the two year olds do seem a little more wary of me: shocked by my different skin colour and clothes. And they take a little while to come around to my silly faces.

I thought about my colleague’s words as I was surveying this scene of mayhem and potential threats, as far as my British health and safety trained eyes saw them. And then I suddenly realised that for the Saharawis, this is as much a part of the children’s education as what they learn within the school walls. I’ve noticed mothers paying very little attention when their children come in screaming from a fight they’ve got into in the street and although I believe whole-heartedly in the need to give children the tools of emotional literacy to describe their feelings and finding empathy for the results of their actions, I can also see that here the children learn from their actions. They fight, they cry and scream, they test their boundaries. And the adults trust that they will learn what hurts too much and what scares them silly. For I have seen that irrational anger and frustration are much less a part of adulthood than they are at home. The childhood anger eventually dissipates and children become accepting and positive as adults. And though I’d never condone violent reactions as a way for children to interact with one another, I secretly love how young girls here if hit by a boy will totally hold their own and punch or slap them right back. Girls give as good as they get and are certainly not shying into the background.

But all that said, I still of course see things that I find difficult. Children here are what I would describe as a mixture of different ages within themselves. In many ways they are so independent and mature from so young. With their skills they can seem older than their years. They can do so much for themselves because they so often have to. Families are large and if you’re one of the youngest you may have no option other than to be self-sufficient for your mother is older and less capable of running around after you than she was when your older siblings were born. Children are good at washing up and washing clothes, they can peel vegetables with a sharp knife from a very young age, are responsible for fetching water, or food from the shops and they are often out with their friends at all hours, safe in the net that is the community here.

In other ways, however, they are younger than their years. Their ability to cooperate with one another seems barely visible. Ten year olds fight over who will hold my hand in the circle and they show no patience in waiting for my attention in class when I’m checking everyone’s writing. They snatch things from each other at the drop of a hat and hit out in retaliation. Tantrums about not going to school are rife even in children who are probably old enough to have accepted the reality of the daily school routine. The screaming and shouting continue long after the tears have subsided from something that hurts and an ability to explain and reason something they have done wrong seems non-existent from my experience so far.

And then there are the other refugee realities of childhood. The children are more often than not wearing an eclectic mix of clothes: brightly coloured t-shirts donated from Spain; dresses that are really and truly for their older sisters, made from fabric that looks a little out of place on a six year-old (think leopard print and slightly outdated florals) and are nearly trailing on the floor; shoes that have been donated from families in Spain that are for another environment altogether (my youngest Saharawi sister, for instance, will often be seen in suede zip-up slightly heeled boots teemed with a purple tracksuit); a mixture of stripes and flowers and checks all in one outfit; and many children are either barefoot in the street or wearing shoes that don’t quite fit. My comfy flipflops are often on the feet of my youngest Saharawi sister as flipflops that are too big are far more comfortable than boots that are too small. I struggle after class with a couple of my students who have to forcefully shove their feet into trainers that are far too small for their growing feet.

Our communal living means that children often fall asleep surrounded by talking adults: we have no way to put them to sleep in a quiet room before we go to bed. They just fit in around the schedule of the rest of the house and set up their bed wherever they find themselves. Their health often relies on trips to Spain in the summer through charitable organisations which mean they can go to see specialists for anything that might be wrong with them, or get an appointment at the opticians and get some glasses that they need for reading and doing their homework. The children in my house snore like nobody’s business for they have the obvious breathing problems that go hand-in-hand with living in a dusty and inhospitable environment.

None of the above should come as a surprise to me, but it all makes me sad when I think about it too much. But it also makes me really pleased that we have the opportunity to do the project we are doing: to teach music, to teach English and to offer a kind of learning that is different from much of the rest of the system the children are operating within. Lessons filled with positive praise, listening to one another and helping each other with our learning, where fighting and hitting are not allowed!

One thought on “Childhood”

All Thoughts of Allen